Home > A FAMILY AT WAR 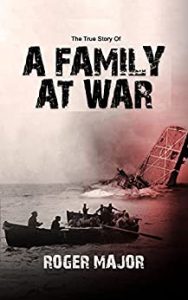 A family of five were living happily and having the best moments of their lives when WW11 started. Things soon fell apart as the struggle for survival kicked in. William Chapman felt it was a thing of honour to defend his nation against the German onslaught. However, it would mean leaving his loved ones—parents, siblings and girlfriend behind in Manchester. A painful sacrifice he was willing to accept but the horrors and tragedy that will follow is something he never envisaged and life won’t be the same again.

Characters in the book include Robert, Harold, William, Edith, Carol, Mrs. Campion, Betty, Albert, and Nurse Dubois among others.

Just as the name implies, A Family at War is a book that captured the adventures, horrors, tragedy and emotions that flare up during warfare—a touching story that promises to hold you spellbound till the end.

BIO: Born and educated in Manchester, England. Roger
Major’s parents separated permanently in 1965, and his
father emigrated to Aus­tralia. Roger enlisted in the British
Merchant Navy in 1975, taking him on many adventures
around the world. Following a medical discharge from the
Navy in 1986. He entered his family’s retail business. From
1992 Roger found work in the hotel industry. He bought
his first guest house in 1996. Roger emigrated to Cape
Town in 2002 and opened a guesthouse. In 2006 he
studied South African history and became a tourist guide.
Roger lives in Cape Town, with his South African wife