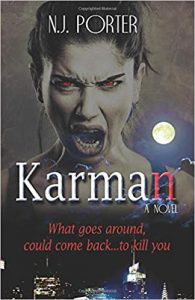 Detective Jackson Arquette was already looking forward to his retirement after years of meritorious service as a detective. However, the discovery of a disemboweled man who was gruesomely murdered without a single trace left behind by the assailant meant the task of unraveling the mystery had to be assigned to him, due to his experience. However, things took a horrific twist when what was thought to be an isolated case turned into serial murders of most bizarre forms.

Working alongside his partner, Ryan, Detective Arquette realized they were in a race against time but he was determined to unravel the mystery behind the murders, even if it means checking into a psychiatric home.

Aside a few typographical errors here and there (I would recommend for the book to be proofread one more time), Karman is indeed an enjoyable and suspenseful book. Karman has a total of 590 pages which makes it relatively voluminous, yet there is no fluff as the book remains thrilling from beginning till the end.

BIO: N.J. Porter is a first-time author with a background in counseling. Over the years, he has worked with and advised many people on how they can overcome their mental health and/or emotional challenges using various therapeutic techniques. After completing his service time in the military, N.J. attained his BA degree then chose to pursue this career path after discovering his natural ability to connect with people in need. Moreover, he also found that helping others brought him a personal satisfaction.

In 2011, N.J. Porter had a vision (inspired by the many reports read about bullying and its traumatic impact on people) of a young woman who had been suffering from psychological trauma caused by her experiences with bullying during her teenage years. He then decided to write this story about her, however, chose to have the narration center on a veteran detective who was assigned to a homicide case. The young woman would later be linked to this case, but the detective would have to find out why; but most importantly, how, since she is securely detained at a psychiatric center. N.J. Porter has this novel reflect on the premise of bullying and how it has the potential of affecting those whom may fall victim to it, ultimately leaving them challenged with mental and/or emotional distresses. His goal for this novel is to help fight against bullying by focusing on how it has the potential to adversely affect others, while also hoping to inspire those whom enact this kind of behavior to rethink how their mischievous actions could cause long-term psychological harm.