Home > Rough Way to the Highway 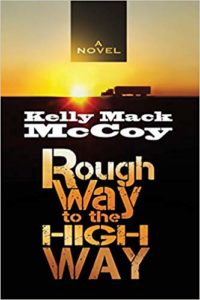 The story began as Mack drove along the highway in his truck as he left his hometown of Pampa behind. Eccentric and God fearing as he has always been, a voice told him to pick up a hitchhiker who incidentally was sitting just under a sign with the inscription “DO NOT PICKUP HITCHHIKERS!”

He obeyed the silent voice and it turned out the mysterious hitchhiker was an ex convict who was just released from prison as he was made to believe. It was not until Mack made a brief stopover at a joint that a street-smart waitress informed him he could be in trouble. Not long after, Mack could see the red flag flying high as two cops stood outside waiting for him.

One unique thing about the book is the funny names of its characters. With names such as Officers Pipe Cleaner and Round Face, Mr. Bull Hauler and Blondie, Rocky, Mr. Tobacco, Mr. Tire, Agent Red Face etc as well as the way the author pierces words together in some instances are enough to send the reader rolling on the floor with laughter.

Mack only thought he was doing the work of a Good Samaritan but never knew he was getting himself into a hell of a trouble with the cops. His extreme spiritual belief sometimes made him odd in the eyes of others.

Barb on her part may be a little old for her job as a waitress but she was as smart as she was humorous, probably more lively and full of life than the average high school teenager. She developed more than a passing interest in Mack and couldn’t hide her feelings, not that she bothered anyway.

Dr. Hashim lived a respectable lifestyle as a medical practitioner but no one knew he was planning a terror attack that will make 9/11 appear like a child’s play, and the nuclear device was expected to destroy about half of Chicago. Barb got to know about the planned attack and gave Mack a heads up but he didn’t take her serious until it was almost too late.

Rough Way to the Highway has enough thrills to keep any reader going from page to page until the last word.

BIO: Kelly Mack McCoy is a semi (pun intended) retired truck driver turned author. He spent most of his career behind the wheel of an eighteen-wheeler traveling extensively through forty-eight states gathering a lifetime of material for his books.
Rough Way to the High Way is his first novel and the first in a series of novels about the adventures of trucker turned pastor turned trucker Mack McClain.
Kelly Mack McCoy lives in Spring Branch, Texas with his lovely wife, Miss Emily and their two Yorkies, Dixie and Dolly.