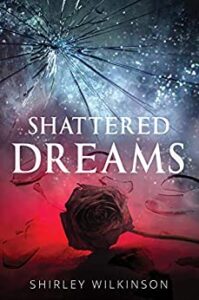 Avila was a hair’s breadth away from what would have been an instant death when Prince Galdren saved her life. However, things took a nasty turn when it was revealed that her saviour was going to invoke the Life Debt according to the laws of Aril—a situation that will literally leave her at the beck and call of the prince to do as he pleases with her.

Still suffering from a loss of memory and some mysteries surrounding her, Prince Galdren wasn’t aware that Avila was the last surviving member of the House of Treunmhor. Avila’s status as a “kept woman” would ultimately give rise to lots of intrigues and challenges but one thing they didn’t envisage was that they could genuinely fall in love in with each other, an outcome that would eventually lead to conflict of interests.

Other characters in the book include King Rougir, Lila, Thomas, Lissa, Professor Gilbert, Olva, Lady Durant, Jacob, Byron, Jessica and Meru among others.

Shattered Dreams is an enjoyable book that will have you flipping the pages till the very end.

BIO: Shirley Wilkinson was born in Houston, TX. Since then, she has either lived or worked across all of the continental US. That, combined with her travel through parts of Europe, has shown her the beauty of diversity across many cultures. It also continues to inspire her to try and capture the nuances of people and how they interact with each other, even if her stories are often set in unique locations. When she is not writing or traveling, she can generally be found in the company of her mini-panther, Guenhwyvar.