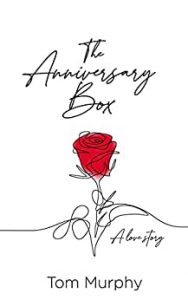 Over the years, Peggy had always looked forward to the day she would walk down the aisle with her prince charming. But now the dream was about to materialize, with only days to her wedding, she was filled with trepidation. Their worldview seemed not to align on certain issues; while she lived more for the moment, her lover would rather delay gratification until every damn problem has been solved. The idea of spending so much on a wedding when $160,000 of student loan was still hanging on Peggy’s neck was something Michael can’t stand. To cap it all, he wasn’t aware it was that much until few weeks ago.

However, Peggy was hoping to enjoy every bit of the occasion and also create memories, therefore she would have to explain it all using a hose, but would that even be enough to convince Michael?

Characters in the book include Peggy, Michael, Declan, Eileen, Peter and Joan etc.

The Anniversary Box is a short but exciting book about an interesting issue not a few people have had to contend with. It’s a concise story that could make anyone’s day.

BIO: I created an institute at Fordham, the Human Resiliency Institute, to put resiliency lessons from the 9/11 aviation heroes I profiled in my book, Reclaiming the Sky, into programs.