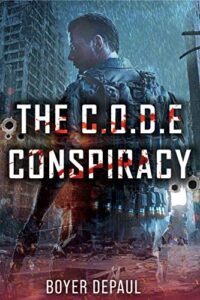 The story revolves around Captain Jon Diaz, a smart and courageous policeman with the LAPD. The world has evolved over the years and unbridled technological advancement has led to the emergence of dangerous super humanoids population that now poses grave threat to humanity. Jon’s job description was to ensure sanity and protect the general population from the humanoids. However, in a twist of faith, Jon became a victim and moved from being a respectable cop to a fugitive.

Jon couldn’t believe he has become a humanoid which means he was no longer fit to continue his career as a cop and worse still would be cut off from his family. It was a totally unacceptable situation but he was determined to fight against a high-level conspiracy so he could save his ass.

The CODE Conspiracy is captivating thriller with a futuristic plot. A story of love, emotion, passion, and conspiracy, a pulsating book that would most likely keep its reader addicted until the very end.

BIO: Boyer lives in suburban Southern California. He enjoys the outdoors and when he’s not outside, he reads and writes stories of ordinary people caught in extraordinary situations.