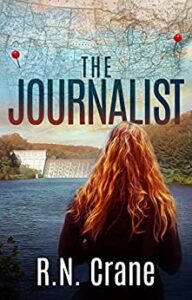 A beautiful lady working as a journalist for the Baltimore Sun Newspaper was assigned a rather dangerous task of conducting investigative journalism on the death of two women who were gruesomely murdered in similar circumstances. Her mother couldn’t hold back her concern as she was afraid Favor Brocks was threading a dangerous path, but getting her to quit the job proved abortive since Favor was passionate about her job and besides, it provided a means for the entire household to earn a living.

Unraveling the mastermind of the murders would eventually prove difficult and dangerous; however, Favor was determined to solve the puzzle at all costs.

The Journalist is a short story with a good plot and was narrated in a simplistic way thus making it refreshing and enjoyable to read. It is a book that will certainly keep its reader turning the pages till it gets to the end!

BIO: R.N. Crane lives in Orange, California. He is a retired engineering consultant writing romantic suspense and detective crime novels. “The Journalist.” is his newest novel. He is a member of Orange County Writers, Romance Writers of America, and Mystery Writers of America.