Home > THE WHEEL OF THE GODS 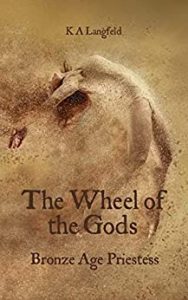 In 1370 BC, a Traveling family offered Morgana a ride in their caravan and they thought it would be of mutual help to everyone, considering that the journey was extensive and the route perilous. However, little did they know that Morgana was a priestess of the Black Forest, and thus possesses some spiritual powers.

Characters in the book include Bronwen, Deidre, Morgana, Rowan, Ganhar, Helga, Edom, Mark, and Olga among a few others.

At only 52 pages, The Wheel of the Gods is a small book and was written in the form of a diary. Although, the story may appear like fiction but it was based on a true life story: an excavation that was unearthed in Denmark, in 1921.

The Wheel of the Gods is absolutely intriguing to read!

BIO: At a young age, I fell in love with space and time when an encyclopaedia told me that the flow of time is personal. I am now Professor in Theoretical Physics at a research-intense University in England. I spend time with Mathematics and large computers to unlock the hidden beauty of nature. My work has let me spend time at many beautiful places around the globe, where I met interesting people. I have fond memories of Korea, the US, France, and England, where I live now with my wife. We have two grown-up children who have started building their own lives.