Home > All Men Are Created 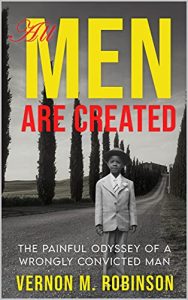 Vernon experienced brutal injustice from an early age. His dead mother was left on the kitchen floor because only “Whites” ambulance was available. He grew to become an angry revolutionist yearning for change against the evil status quo. Years later, he would be convicted for a crime he was innocent of.

Vernon’s deeply touching narrative captured the deplorable situation of African Americans living in the United States.  The untold indignities and oppressions suffered over the centuries and even to date. Slavery may have been officially abolished but certain segments of the population continue to face racial discrimination. All Men Are Created is a nonfiction story that boldly exposes unfair practices that put Blacks and Hispanics in harm’s way.

Characters in the book include Vernon, Linda, Jerome, Bob, Derric and Ruth etc.

All Men Are Created is indeed thought-provoking as it elicited intelligent questions that have remained unanswered over the years. The book is equally informative, complete with well-researched historical evidences and irrefutable facts.  Nobody should miss this eye-opener!

BIO: My life has been unusual, to say the least. I was born in Harlem at the end of World War II. It was the waning days of the cultural phenomenon known as the Harlem Renaissance. My mother died in New York in 1950, and I was relocated to Los Angeles. I grew up one block from the famed Central Avenue Jazz Corridor which existed between 1930-1960. The parameters of my young life were determined by racial restrictions like residential “red-lining,” the Supreme Court decision in Brown vs Topeka Board of Education, and Los Angeles’ busing program to achieve racial integration. I vehemently rejected the non-violent protest strategies of Dr. Martin Luther King, and embraced Malcolm X. In 1966 I became one of the first one hundred members of the Black Panther Party. I was one of many BPP protestors opposing the repeal of California’s Open-Carry gun law. I was sentenced to prison and was present when George Jackson (Soledad Brothers) was assassinated at San Quentin Prison. In the process, I met Angela Davis more than once. After my release in 1972, I became a successful businessman and was appointed Contractual Project Manager at Los Angeles International Airport during the 1984 Olympics. I remained at LAX till 1989 when I was arrested for a murder committed in 1963 in Hollywood. I was sentenced in 1990, and served nearly 30 years for a crime I did not commit. Since my release in 2018, I have written the book entitled, All Men Are Created. I hope to give a voice to the voiceless millions of men and women who die each day in the United States prison-industrial complex of the 21st century. I want the readers to feel the pain and psychological torture inflicted on human beings living in “The-Land-of-the-walking dead.” A place in which everything is stripped away, except the natural impulse to breathe.