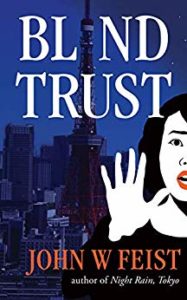 The plot of Blind Trust was set on a futuristic timeline, with the background based on characters from diverse places. The book is a work of fiction about an imaginary catastrophe that hit Japan, a country that is famously known for its organization and civilization.

Tanaka, a commissioner of police at the Tokyo Metropolitan Police, suddenly finds himself in America with an urgent task of negotiating with a reliable contractor to help rebuild the country’s badly damaged pipeline infrastructure.

Tanaka’s mission made it necessary for him to get in touch with Brad Oaks; the vice president of the California based Elgar Steel Corporation.

Brad was a thoroughbred American, his wife Amaya happened to be originally from Japan (although half-Japanese and half-American) but certain cultural stigma back home made her to accept America as her new abode but with periodic visits to Japan. She was the unknown daughter of the steel magnate, Ernie Elgar, whose death led to the discovery of Amaya. Brad and Amaya became an item and through Amaya’s inherited shares in Elgar Steel, Brad was able to cement his position in the company.

Already in their forties with very slim chance of ever having their own kids based on medical reports, they were faced with the option of adoption, an idea Brad wasn’t averse with but Amaya felt it would be odd to adopt a child that can only come of age when they are already old.

Sarah Jane and June Elgar were the twin daughters of Ernie Elgar, however, they were the polar opposite of each other. While Sarah who became the CEO of Elgar Steel was a dedicated professional, June on the other hand was as mischievous as she was disruptive. Her fraudulent attempt to buy over Amaya’s shares was effectively checkmated by Brad.

Other characters in Blind Trust include Rod Graham, a misogynist capitalist who ended up having to choose Cindy Atherton, a very tall and smart lady as a top executive in his company in place of his own daughter, Rita, who was not just a drug addict but has been in and out of prison severally. Although, Graham wasn’t giving up on Rita as he hoped she would be able to get her acts together on time to inherit his company.

It was business that would bring the two families and companies together as they work to achieve same objective.

Blind Trust no doubt has a rich plot and well developed characters. Events in the book encompassed politics and international relations, emotions, family life, the oil and gas industry etc while activities occurred across international borders in countries such as United States, Japan, Canada, China, North Korea, Russia and Australia.

Family intrigues as well as international politics involving belligerent nations must be overcome if Japan’s damaged LNG infrastructure must be repaired, which of course is the ultimate goal.

Blind Trust is an interesting book that could keep anyone engaged till the very end.