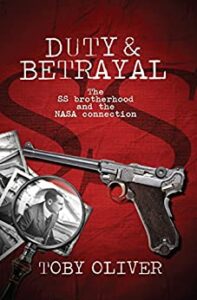 Duty and Betrayal is a fictional thriller that captured some of the events that occurred during the aftermath of WW11 and the ensuing cold war. The threat from Third Reich may have been quashed by the allies but the cold war between the West and USSR was no less a threat to global peace.

The plot revolves around Sir Spencer Hall, during the cold war era when secret agents and intelligence gathering through spies was at its peak, as the CIA, Mossad, KGB and M15 among others were conducting desperate espionages aimed at outmaneuvering one another. Spencer had to coordinate the British end of the espionage—a risky and intriguing task that will ultimately push him to the very limits of endurance.

Duty and Betrayal may be a work of fiction with imaginary characters, but it was able to capture all the thrills, suspense and actions that characterized that period in a very captivating way. The book will certainly give young people an insight into what went down during that interesting period of global history, while also offering older folks the opportunity to reminisce with nostalgia.