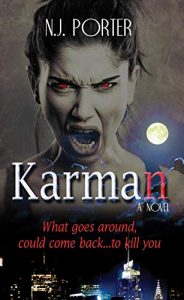 Detective Jackson Arquette was already looking forward to his retirement after years of meritorious service as a detective. However, the discovery of a disembowelled man who was gruesomely murdered without any trace left behind by the assailant meant the task of unravelling the mystery had to be assigned to him, due to his experience. However, things took a horrific twist when what was thought to be an isolated case turned into serial murders of the most bizarre forms.

Working alongside his partner, Ryan, Detective Arquette realized they were in a race against time but he was determined to unravel what was behind the gruesome murders, even if it means checking into a psychiatric home when things got tough.

Karman is a captivating crime and horror thriller that would keep readers flipping its pages with keen interest till the end—a must read!

BIO: N.J. Porter is a first-time author with a background in counseling. Over the years, he has worked with and advised many people on how they can overcome their mental health and/or emotional challenges using various therapeutic techniques. After completing his service time in the military, he attained his BA degree then chose to pursue this career path after discovering his natural ability to connect with people in need. Moreover, he also found that helping others brought him a personal satisfaction.