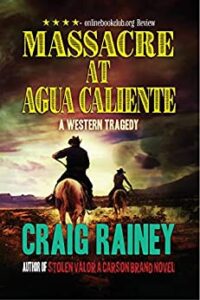 A group of settlers embarked on a journey to the territories during the 17th century when horses were the only feasible means of transportation over long distances. However, to get to their destination will mean passing through the rather volatile jungles beyond Texas where hostile Indian Aborigines roamed in the wild. Part of the group was a dangerous dwarf, a couple who couldn’t get along and other strange bedfellows.

This book has lots of characters, a windy plot and setting that traversed the United States and Mexico. It gives a hint on the culture and lifestyle of the people that inhabited the areas long ago, as well as the lawlessness and anarchy that was the norm before modern civilization as we know it today.

Massacre at Agua Caliente is an interesting book that will keep readers engaged from the beginning to the last page.