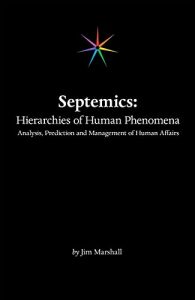 Septemics is a thought-provoking and deeply analytical book that dissects and explains human behavior beyond the ordinary. This book is a goldmine of sorts for those that want to understand the dynamics of human nature in a more defined way, to better grasp happenings around us.

There are also practical steps and actions outlined in this book that would help the reader to live a more positive and productive life while having a more conscionable worldview. Another intriguing aspect of Septemics is that the things written by the author are not just factual but resonates shockingly with our realities.

By studying the “scales” and implementing them accordingly, one is assured of a relatively more productive and stress-free life considering they would be more purposeful, less emotional and result oriented.  The book also contains glossary that makes it easy for the reader to grasp terms used in the book.

Septemics is a great book that is highly recommendable and indeed most people would benefit a lot from it.

BIO: Mr. Marshall is a polymathic intellectual who has has devoted over 50,000 hours to the study and practice of multiple dimensions of human potential and development. He received a classical education as an honor student at a Jesuit Military Prep School, was accepted into engineering school while still a junior in prep school, and attended college on academic scholarship. He graduated college with a Bachelor of Science cum laude. While still an undergraduate, he began the study of “alternative” Arts and Sciences which today would be described as Transformational and Holistic. Eventually, he became a professional practitioner and, after 28 years of formal education, had a long career as a Human Development Engineer. Jim has integrated the best aspects of the most advanced techniques on the planet, and expanded their limits by his own Research & Discovery. He has successfully treated and/or trained hundreds of clients over a 40 year career, and is the inventor of Septemics and several consciousness-expanding systems. His areas of expertise include psychology, philosophy, theology, parapsychology, science, engineering, mathematics, law, literature, history, music, organization, metaphysics, military science, political science, physical culture and education.