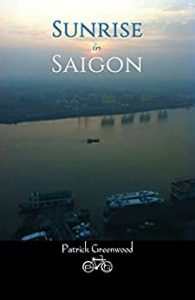 Jack Kendall knew that his marriage was heading for the rocks no amount of effort could save it. But he won’t allow his two lovely children to suffer for it since they were still minors, so he decided to tolerate his wife’s excesses the much he can. However, when he came across a beautiful Vietnamese woman online the situation took an unexpected different turn. Already, he had developed special interest in Vietnam since he was only eleven and couldn’t resist the urge to get on a flight to Saigon.

When Jack found himself torn between three women, he realized there is need to let go regardless of the strong feelings. Meanwhile, an international business deal involving his company and others was facing serious challenges. He must find a way to get his family, relationship and official transactions in order.

Sunrise in Saigon is a captivating novel that is worth reading!

BIO: With echoes of Tom Clancy and Jack Higgins, “Sunrise in Saigon,” is Patrick Greenwood’s first book in a new series about cybersecurity, passion, and international espionage.

A true believer in listening to one’s passion, Patrick Greenwood began writing in early 2020 based on several trips he made while cycling in various countries. In this novel, Sunrise in Saigon, Patrick draws upon several non-fictional events that happened in Vietnam including the war with the US, the last days of Saigon falling, and the chaos at the US embassy. Having remembered these events as a young man, Patrick grew up wanting to travel to Vietnam someday and visit these places for himself.