Home > The Everlasting Spring: Beyond Olympus: Benjamin and Boudica 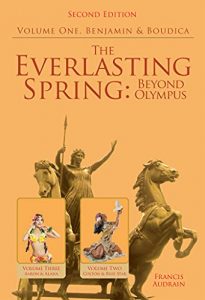 The story revolves around a courageous couple named Benjamin and Boudica who lived during perilous times. While Benjamin was of Jewish descent, Boudica hailed from the region known today as England, yet they both shared the same worldview i.e. how to overcome the oppression, injustice and hypocrisy being perpetuated by the Romans. Both of them have a burning desire to avenge the cruel murder of their loved ones. However, the odds were agonizingly not in their favor as they confront the Roman Legions.

Boudica’s daughters had been ravaged, her escorts burned to death while she suffered unspeakable brutality. Benjamin’s wife was defiled and eventually murdered in cold blood. They became united in their quest to bring down the evil Romans and would do whatever it takes to achieve their mission.

The Everlasting Spring has an intriguing plot that was set following the Biblical New Testament era. It is a book that will not just entertain its reader but would also enlighten them. It provides a unique perspective and thought provoking ideas on historical/religious events most people often take for granted.