Home > The Legend of Deputy Jim 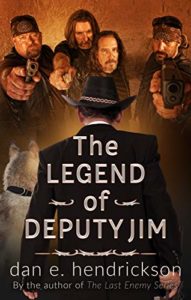 The Legend of Deputy Jim is quite similar to The Good Fight that was written by the same author. However, the latter is supposed to be a sequel since the time period the events in it occurred was relatively more recent. Nevertheless, while both books shared some characters, the main character in the book under review is Jim. Beginning from his early life activities as a pugilist in the American Athletic Union, and his perseverance to make it against all odds made him to retain his job as a cook after getting married to Linda while saving up money to pay for his college classes and ultimately enlisting as a law enforcement officer, since his dream of joining the military couldn’t materialize now he was married and already has a baby. He couldn’t imagine staying away from them for prolonged period of time as would be the case if he were to join the military.

At barely 300 pages long, the book is quite interesting and reveals a lot about the inner workings of the American law enforcement beyond what is known to the public.

The book also covered areas such as family life, crime and violence as well as thrills associated with bikers.