Home > The Power of Rain 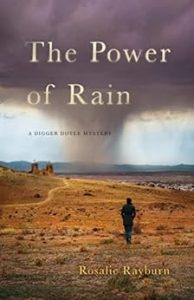 The residents of Las Vistas, a desert town missed the rains and couldn’t wait to experience a downpour as temperatures surged higher. However, when the rains eventually fell, it came in torrents, damaging properties and infrastructure. As if that wasn’t bad enough, the plan by developers to construct a new road through the cliffs threatens to cut off access to a sacred site. However, mayor of Las Vistas, Jack Kimble needed the investments and tax the new road would bring but going against the wish of the residents could cost him reelection.

Digger was a reporter working with Courier, a neighborhood media house. She realized that journalism was fast losing relevance in the age of social media but it was a profession she has passion for.  But how to create a balance as tempers rise on both sides becomes a challenge.

The Power of Rain is an interesting story with a plot around politics, journalism and environmental issues.

BIO: Rosalie Rayburn is a journalist and author who has lived in the USA, UK, Ireland, Norway, Saudi Arabia, Australia and Portugal. She earned a bachelors’ degree in Sociology from Trinity College Dublin and started her newspaper career freelancing for the Irish Times and Irish Independent. Later in Norway she was news editor for the English language Saga Weekly and contributed to the trade magazine Norwegian Oil Review. Returning to the US, she spent 18 years as a staff writer for the Albuquerque Journal; during which she covered business, local government, energy and telecommunications.
She had short stories broadcast by Radio Telefis Eireann in Ireland, authored a business guidebook “Living and Working in Saudi Arabia” published by How To Books Ltd., UK, and translated the Norwegian memoir “Norsemen Follow the Trail” published by Dreyer Bok, Stavanger, Norway.
Now retired, Rayburn divides her time between the US and Portugal where she contributes to the lifestyle magazine “Portugal Living” and writes a blog about relocating to and living in Portugal.