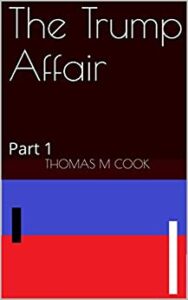 This Trump Affair is a satirical book that based on a certain American president named Rump, who was a narcissist. President Rump believed he was all knowing and doesn’t like being challenged, as he felt his words should be taken as gospel.

Regardless of how ridiculous some of his assertions were, President Rump had fanatical fans who actually believe in everything he says or does not minding how stupid it may be. Skeeter and Billy Joe were among his ardent followers, and when President Rump made a rather ridiculous claim that there was an attempt to poison him with blueberry, the duo took it upon themselves to incinerate blueberry farms as a way of being in solidarity with President Rump. However, it was a rash decision that would lead to unintended consequences.

Satirical books can be funny and often aimed at bringing to the fore, the bad character of a public figure. However, The Trump Affair is one hell of a classic book that is highly entertaining and could make you to laugh endlessly.