Home > THIS IS NOT A LIE 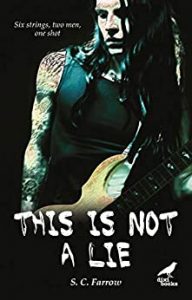 The book is about a group of five singers who were struggling to break even in Melbourne against all odds. However, when Chris, a member of The Blackhearts abruptly left the group, they urgently had to seek for a suitable replacement in order not to miss a great opportunity to break into the limelight.

Characters in the book include Pauly, Tommy, Angus, Chris, Karen, Randall Thorpe, Shane, Geezer Higgins, Harry etc. The story is told through the perspective of Joel Reed, a rock star and leader of The Blackhearts music group.

Harry seemed to be a suitable replacement for Chris, however when Karen, Joel’s sister and financial partner, realized he was such a pretty boy and LGBT too, she tries to stop him from joining the group. She thought that since Joel belonged to LGBT, a relationship between him and Harry could prove fatal to The Blackhearts and all they’ve worked for.

The plot was set in 1980’s Melbourne when gay rights weren’t so strong and defined. The book is highly entertaining and equally shows how far the world has gone in bringing equality to people of diverse sexual orientation.

BIO: Born and raised in Australia, S.C. lives with her family in the leafy green northern suburbs of Melbourne, Australia. She is currently studying for her PhD