Home > A Time for Vengeance 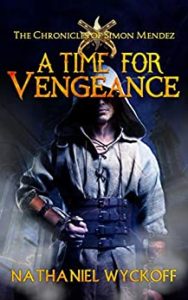 The story is about the travails of Jews in parts of Europe during the Spanish Inquisition. Salvador Mendez was forced to take up a new name as Simon to reflect their converso status as Catholics. Simon alongside his parents and siblings, just like other Jews, were at the receiving end of state sponsored oppression against them.

When Diego was suddenly arrested on trumped up charges and was to face the deadly Spanish Inquisition, Simon realized it was time for him to step up as a man, not just to protect his mother and siblings but also to find a way to rescue his father who has been sentenced  to death by burning. Simon knew it would be extremely difficult, if not impossible to rescue his father from being set alight. However, he was determined to find a way.

A Time for Vengeance is an interesting book that gave an insight on the sort of persecution Jews and other minorities faced during the Spanish Inquisition as well as how strong family bond can be even in times of grave danger.