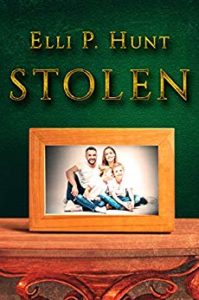 Stolen is a thrilling work of exciting fiction penned by author Elli P Hunt. Beautifully written and addictive, Stolen sets a new standard for thriller novels to entwine their storylines with a whimsical, mysterious tone. Setting the mood for the audience, Hunt carefully constructs a world where any day could be dangerous, and no one may foresee such a danger coming for them. Inner conflicts between the characters run rampant in this novel which adds a layer of depth and intimacy to their journey. The character of Lynn was truly powerful in this novel, as she often found a way to tug at the reader’s heart strings.

Throughout Stolen, I, as a first-time reader, felt an immersion of wonder as I went on the adventure with Rose and Kurt to solve Abi’s disappearance. This piece exemplifies its ability to provide the reader with solid backstory, while enticing the reader for what’s to come in the following pages. One of the greatest aspects of the writing is that it does NOT give away the ending before it needs to. While foreshadowing is prominent, it does not interfere with the reader’s guessing game of what will come next. Instead, it simply annotates useful, kind nudges toward limitless possibilities of endings, leaving the reader with questions for a satisfying ending. I found that this piece was actually quite the mystery as I tried to solve the disappearance of Abi myself – wondering who could’ve possibly been so heinous as to steal her from the confines of her own home. The fact that the water was left running and green beans were spilled all over the floor left a pit in my stomach as I tried to understand exactly what happened, knowing that it probably wasn’t good news. This feeling of dread kept me reading and engaged with the characters of the novel.

There’s a complex cast of characters to get to know as the novel progresses such as the police force and their efforts, the family of Abi, and the actual captor himself. The dynamic of the captor truly took on an exciting role as the reader begun to realize how much he truly knew about everyone in the town and Abi. Always one step ahead, the villain in this story is very valuable to the plotline and brings even more thrill to the adventure. Author Eli Hunt has built fantastic lore here which is well worth engaging with. I particularly enjoyed Rose and Kurt’s interactions and realistic dialogue and reactions to the situations they were put in. Overall, Stolen is a thrilling work designed to leave reader’s on the edge of their seat the entire way through!

Overall, I thoroughly enjoyed reading the adventure that is Stolen. I was thrilled by the intertwined relationships between the characters and the powerful plot twists that kept me guessing throughout the journey. Lynn, Kurt, Rose, and Reed are beautifully constructed characters with their own inner conflicts that guide the conflict of the narrative. Altogether, the text was very well written, and I will be reading more of this author.

BIO: Stolen is Elli’s first published novel and she continues to write more stories to be published soon. She lives in Northern Wisconsin with her feisty cat, Sophia. When Elli is not writing, she enjoys gardening, cooking/baking, hiking in the woods, camping, and biking. She is a graduate from the University of Wisconsin-Stout with a Masters in Education. She is now retired from teaching at the University of Wisconsin-System. She has two adult daughters and four grandchildren, whom she adores.