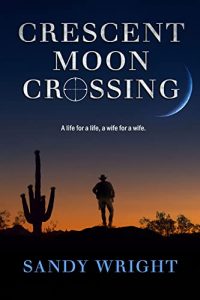 Jace had a fiery temper that cost him his scholarship when he violently shoved aside his instructor. He had joined the military as an alternative and was already climbing his career ladder to the top when he started having an extramarital affair with a beautiful colleague and daughter of his boss. He wouldn’t let go of her even if it means eliminating his legally married wife.

Abby couldn’t believe she was still in love with her cheating husband and was even willing to forgive him if only he would be remorseful enough to beg her. However, if he fails to take the second chance Abby is offering means she would have to bring down the roof on everyone. The battle line has been drawn and the wrong decision could lead to death and destruction.

Characters in the book are Jace Merrick, Rumor, Abby, Miguel, Behan, Coop, Omar, Tom, and Anton among others.

Crescent Moon Crossing is an enjoyable novel about crime, love, passion and tragedy. It’s a book worth reading!

BIO: Sandy has a degree in Journalism from the University of Missouri-Columbia. CRESCENT MOON CROSSING was a finalist in the Pacific Northwest Writers contest last year. Her previous novel, Song of the Ancients, won 1st place in PNWA as well.