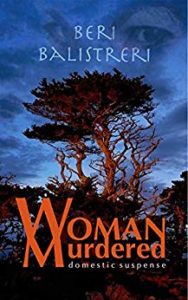 All in all, Woman Murdered is a very well written suspense novel that holds hours of thrilling and compelling storyline. The author does a wonderful job in building an exciting narrative that leaves readers at the edge of their seats. From beginning to end, Woman Murdered causes the reader to question all that they know about its characters and the underlying mystery revolving the storyline. The author builds an eerily poetic atmosphere with its audience in which they feel oddly uncomfortable but yearn to know what comes next. This complex tale of twisting turns and horrific adventure is for any thriller reader. Yet, the writing is easy to understand and defined for those who are desperately seeking a well-written story to whisk them away.

Woman Murdered is a fantastic thriller and mystery. It captured my attention from page one, and every time I put it down, I couldn’t wait to pick it up again! Interesting characters, an insight into the Autism-spectrum world, the descriptive beauty of the location, clever double entendres, and words I had to “look up” kept me coming back for more. Good pacing, engaging characters, and best of all, a plot twist I didn’t figure out till the very end! I hope the author revisits these characters; I’ve come to care about them. The book is steeped in wickedness. The dark side of human nature is present throughout. Avarice, hypocrisy, snobbery, prejudice, betrayal, and plain old cruelty: all are prevalent and in the main are targeted at a thirteen-year-old boy who is defended only by his mother’s love and her determination to do the best for her son.

The odds against the boy’s mother are long. Her son is autistic. To be more precise, he suffers from Asperger’s Syndrome and is obsessed with violent video games. Yet worse he stands convicted of patricide, with a suspended sentence hanging over him pending the outcome of treatment by an ambitious female psychologist specializing in animal therapy.
The setting is California’s sunshine coast, close by a popular but dangerous surfing spot – to which boy and mother have recently moved – where seriously big waves roar in beneath seriously high cliffs.

The opening is gripping. A young surfer is pinned down thirty feet below the surface by a fold in a monster wave. He’s as good as dead, when something pushes him to the surface. He thinks it’s a shark, thinks he’s about to be eaten but when this doesn’t happen, he imagines it might be a dolphin. But no, It turns out his savior is a floater. A bloated gas filled corpse. This might seem a touch unlikely but knowing little of such matters I make no criticism.

The corpse proves to be that of an elderly lady, a local; well known if not for her gracious manners, and undeniably well off. Marks on the body pretty much prove she was murdered, pushed off the top of the cliffs and in the investigation that follows the thirteen-year-old Asperger’s sufferer becomes a prominent suspect. There’s no direct evidence but he’s been convicted of killing his father and he likes violent video games. In no time at all a full-blown witch hunt is on.

The book is well researched and well written with good characterization and an agonizing but generally feasible plot. As for the outcome, that’s not for me to tell. But I will say this, close to the end, the finale of which is perhaps just a touch too poignant for my taste; there comes a truly enormous shock.

Overall, this is a deliciously twisty mystery/thriller. The characters are beautifully drawn, and I was guessing right up till the end! Balistreri writes with a deep understanding of the darker side of the human heart and what may drive someone to extreme behavior. This beautiful book brought me to tears… the tragedy that the characters endured, and the beauty that came of the characters’ journeys. The protagonist herself reads stories by O. Henry and Robert Luis Stevenson which add profound insight as to what’s going on in her head and in the misty little beach town. It has elements of both Charles Dickens and Pretty Little Lies (a unique blend of gorgeous descriptions/locations, enduring characters, and terrifying realities). I think that everyone can gain something from reading this story. Highly recommended if you like well-written, edge-of-your-seat storytelling!