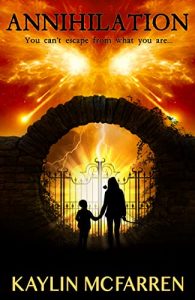 As the pending battle between Heaven and Hell became imminent, Lilith’s shocking suicide paved way for Ariel to take over her body and ensure that Sam is kept alive by all means necessary. However, having condemned Hecate, the Woodland Goddess to death for organizing mutiny, Lucinda’s aim to become the most powerful ruler in hell, was still on track.

Meanwhile, Ariel had to seek for help from wherever she could get it just to ensure she finds Sam before Lucifer does. Sam was in possession of more power than any other being on the planet, but wasn’t yet abreast with how to put it to use. Ironically, the powers can bring death and destruction but can also save everyone, depending on the side that manipulates it. Thus, time is of essence as both divides struggle to get at it first.

Annihilation is a thrilling fantasy story based on the imaginations of the author, about a supposed apocalypse that ought to have taken place….

BIO: Kaylin McFarren has received more than 60 national literary awards, in addition to a prestigious RWA Golden Heart Award nomination for FLAHERTY’S CROSSING – a book she and her oldest daughter, New York Times/USA Today best-selling author Kristina McMorris, co-wrote in 2008. Prior to embarking on her writing journey and developing the popular THREADS psychological thriller series, she poured her passion for creativity into her work as the director of a fine art gallery in the Pearl District in Portland, Oregon; she also served as a governor-appointed member of the Oregon Arts Commission.

Her award-winning time-travel adventure, HIGH FLYING, asks challenging questions that will linger long after the final twists are revealed. Jumping to the supernatural-horror genre, Kaylin’s clever GEHENNA series leads readers into the pit of Hell, through the mechanisms of secret societies, and across the Earth’s crust, ever raising the stakes for her leading duo—a wicked demon and guardian angel presented with shocking revelations.

With each story she writes, this author delivers unexpected twists and turns and keeps her readers on the edge of their seats, leaving them guessing and thoroughly entertained. When she’s not traveling or spoiling her two pups and three grandsons, Kaylin enjoys giving back to her community through participation and support of various charitable, medical and educational organizations in the Pacific Northwest, and divides her time between her homes in Portland, Oregon and San Diego, California.