Home > Captured by the Viscount 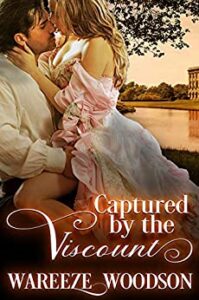 Isabel thought she could return the Viscount’s documents while retrieving her priced belongings that were forcefully taken from her by Edgar, her wicked half-brother. It soon dawned on her that she underestimated how dangerous her move was when she was caught and taken captive by Lord Rutherford. The penalty for burglary was extremely punitive but Lord Rutherford has other ideas he felt would be more fruitful than seeing a beautiful lady suffer the indignities of being sent to the hellish gaol.

In a twist of fate, Lord Rutherford was able to turn a rather nasty situation into a favorable one by walking down the aisle with Isabel but he would have to contend with Ralph who was passionate on marrying Isabel, and not even the Viscount would stand in his way. The stakes were high and it can only end in tragedy.

Captured by the Viscount is a sultry romance novel that captured the sights and sounds of 19th century London. An interesting book that will keep the reader engaged till the very end.