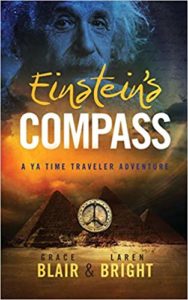 The book started on a tense note as Raka; dispirited and frustrated that his uncle and brother had sidelined him in the scheme of things in Atlantis, was on his way to the land of darkness which the Sons of Belial represented. Armed with the intention of betraying his people by joining ranks with their common enemy as well as a plan B which he kept within him should his primary motive fail. On discovering that the Sons of Belial had ulterior motive toward him, Raka resorted to his plan B and drank a vial that instantly transformed him into fire-spitting dragon. One unique thing about the book is the vast changes in its plot as thousands of years letter, in 1446 BCE, and the location changed to Egypt during the enslavement of the Israelites in the land of Pharaoh, with Moses being very much around. Once again, the plot changed to Germany of the 17th century during the time of Albert Einstein where the young Einstein was taught by his father, Hermann, on how to use a compass.

Obviously, the book is all about the life and times of Albert Einstein, the father of physics. However, the earlier interlude about Raka and Moses was an introduction that would enable the reader to under events as they occur in the life of Einstein. As the book progressed, Albert would end up clashing with Raka.

As a dystopian fiction, the author incorporated facts with fiction to create an intriguing book.

Although Einstein’s Compass might appear somewhat confusing to some people, but readers that love deep knowledge would certainly find the book fascinating.

BIO: Grace Blair is an award-winning self-help and motivational author, and podcast host, who has assisted thousands to find their spiritual wisdom to solve everyday challenges. Throughout her adult life, Grace became a serious student of the spiritual. She found that, often, psychological principles and practices were incomplete, but could be filled out by adding the missing spiritual component. Her approach was always to see practical applications for what she uncovered in the mystical. It was through immersing herself in this field of study and experience that she came up with her idea for her book, Einstein’s Compass. She lives in Lubbock, Texas, with her husband, Dr. John Blair.