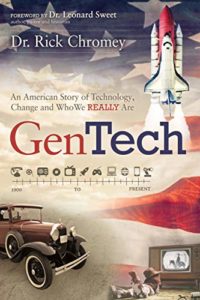 GenTech is a refreshing compendium of socio-cultural events that took place in America over the generations. The author carefully dissected each particular generation, beginning from the G.I. Generation (1901-1924), Silent Generation (1925-1942), Boomer Generation (1943-1960), Gen X (1961-1981), Millennials (1982-1999) and lastly iTech (2000-present). He emphasized their worldview and respective contributions to cultural, socio-economic and also technological growth of the United States in particular and the world at large.

Going through the pages of GenTech will not just leave the reader with nostalgic feelings of how the world used to be, or how fast things have changed but also what is to be expected in the coming years.

The book highlighted how technology is evolving; paradigm shifts as well as how human perspectives are following in its paths.

In essence, this book could be described as an analogy of the technological progress that has taken place in the world, particularly within the United States, and how it affects what would be available in the near future. Thus, aside being beneficial as an enlightenment tool, it could also act as a guild in helping investors or businessmen to make the right choice, in terms of specific areas to invest or avoid as the case may be for long term gains.

GenTech is highly recommendable for everyone!