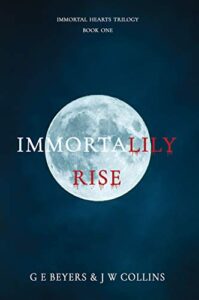 The story is about Lily Du Plessis, a 17-year-old orphan who had to put up with a grand dad who loathed her presence and uncle who didn’t like her but was determined to keep the promise he made to Lily’s mother on her dying bed, to protect her. The murder of her uncle in mysterious circumstances left Lily vulnerable and she was desperate to stay out of harm’s way, even if it means leaving England for good and heading to the United States.

Lilly was unlike other girls her age, she was emotionless and possessed supernatural powers that often comes handy whenever she was threatened. She had witnessed a lot of tragic events, and wouldn’t understand why some people were out to get her, including her Grandfather.

Characters in the book include Uncle Noah, Tallis Summers, Olive Briggs, Mica, Slater, Alex and Mylo among others.

Immortalily Rise is an interesting book and has more than its fair share of suspense, mystery and tragedy—it is an enjoyable fictional story.

BIO: Jak Collins was born in Perth, Western Australia in 1992. Married to his soul mate and best friend. He has one incredible, beautiful little girl called Emerson. He is highly creative, and runs a successful Perth based photography business – JWC.IMAGE – where he gets to shoot some of the most beautiful models in WA, on some of the most pristine beaches in the world. He spent two years at The acting corps in Los Angeles, and he is also the Co-Author of the YA urban fantasy – Immortal hearts trilogy. In his spare time, he Likes to ride his motorcycle, go free diving, hang out with photography associates and friends, and enjoy family life.

Georgia Beyers was born in London, England, and has been living in Australia since 1989. Married with three grown up children, three grandchildren, four foster children, and a dog called Charlie bear. She loves books, chocolate and cats. She hates sharks, cottage cheese and the cold. Georgia writes both middle grade books, and young adult books. In her spare time, she enjoys reading, travelling, spending time with her family, especially her children and grandchildren, and writing about herself in third person – Haha.