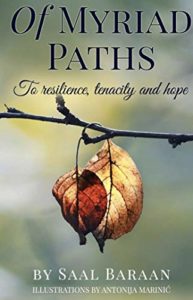 Just like most classic books on poetry; Of Myriad Paths has got deep lyrical lines that could leave one immersed in thoughts. It has lots of passages that would be easily identifiable to a cross section of people. As I read through it, I kept experiencing feelings of déjà vu, like the author had me in mind or was expressing real life occurrences with me as the major character when he was writing the book.  However, I wasn’t fooling myself one bit because our paths never crossed and what I felt would most likely be felt by others too—the hallmark of good poetry!

The use of pictures and illustrations equally helped in driving home the emotions as captured in the poetry.

In some passages, Of Myriad Paths was scripted with bland words but with its import lying beneath the surface as the reader is made to read between the lines, while in other passages, the meanings are direct with the words.

The book no doubt evokes lots of emotions, as it could make one moist in the eyes especially when reading certain passages such as where the character is helpless and laments of her unenviable state; sick and hopeless. Then again, in another breath, the character also appreciates the fact it was a miracle to still be alive albeit with slim chances of being perfect again, considering that others had it worse.

Another strong point of the poetry is its versatility; it encompasses varied forms of characters and change in scenery. This will enable people to key in easily with particular characters that closely relate with them.

Tons of poetry books have been written but Of Myriad Paths would certainly be rated among the top ones.

BIO: Saal Baraan is a pen name of author and poet Sulaiman Bharwani. Saal has authored
numerous publications, book chapters, newspaper columns and editorials. This is his
first book of poems. He is a pediatrician and a Professor who enjoys mentoring the next
generation of doctors. He lives in Michigan with his wife and two daughters and enjoys
nature walks when Michigan weather permits!