Home > Mystery of the Transcontinental Railroad 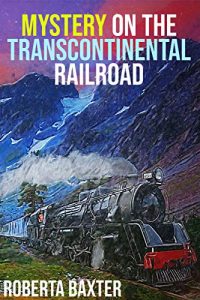 When Dylan O’Neill, alongside Christopher and David, his brother and cousin respectively, were sent by his mother to go and deliver soup and brownies to Mr. Chaney, little did they knew they were going to meet the shock of their lives. It was only the beginning of an intriguing adventure when they came across a magic watch that would teleport them on a time travel to the 19th century.

Characters in the book include Christopher, Dylan, Mr. Chaney, Dan Carson, Ryan, Fang, and a few others.

Mystery of the Transcontinental Railroad is an exciting fun book that enables the reader to participate actively in an adventure. At the end of each section, you will have to make a decision, and also at liberty to return and make a different choice. However, whichever track you choose will equally unravel a different outcome. In essence, it means you will be in charge of your destiny as you embark on a thrilling adventure.

This is an engaging and educative book with pictures and activities, although it is ideal for young people, but can as well be enjoyed by anyone.

BIO: I have written numerous nonfiction books for students of all ages. “Mystery on the Transcontinental Railroad” is self published fiction. I’ve always loved trains and decided to share that fun with readers ages 8 to 11, along with a dose of history. The second book in the series is “Mystery of the Stolen Locomotive.”