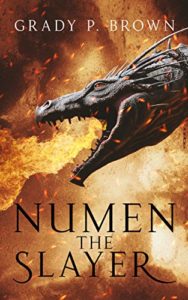 The plot was set during the dark early times when the world was still mired in magic, sorcery and endless battles in a struggle for survival.

Galen was still a child when his father, Vaegar handed the deadly Gramfyre to him just before giving up the ghost. The Gramfyre was not just an ordinary sword but one with potent mystical powers and Vaegar had created it using the last drop of his blood.

1300 years later, Numen was having a discussion with his friend Tristan in the courtyard when a strange female voice called out to him. The ominous voice was coming from a dark hallway within the castle and out of curiosity; Numen went after it and was followed by Tristan. On getting to the source, Numen saw a strange sword; he has never seen anything like it before. Unknown to him, it was the magical and deadly Gramfyre that was created by the sorcerer, Vaegar, a long time ago.

Unknown to Numen, Gramfyre was going to change his life forever. The discovery of Gramfyre showed he was the true heir to the golden throne but word soon got to King Robar about it and he arrived with his army to wipeout their entire household. With the help of the Gramfyre, Numen was able to escape alongside Tristan, Joe the savage and few other friends as his father; Lord Viktor’s castle was razed to the ground.

The deformed, depraved and cannibalistic King Robar was as wicked as he was sadistic, and also had his eyes on the golden throne.

Sitting on the golden throne at the Imperial Palace, built within the vast walled city of Chrysos, was Emperor Gregor Sylva in company of his two sons, Crown Prince Edgar Sylva and High Prince Autem Sylva. The shrewd Autem conspired with some barons and assassinated his father and brother in his ambition to become the emperor.

The inordinate ambitions of these men will eventually pit them against each other as well as Numen. Who will defeat all to claim the golden throne in these endless battles?

The violence, bloodletting and gore that took place in the book were well detailed and quite gripping, which gave it the feel of a motion picture. Reading through the pages gives similar thrills like watching Game of Thrones, incidentally appears to have similarities in plot.