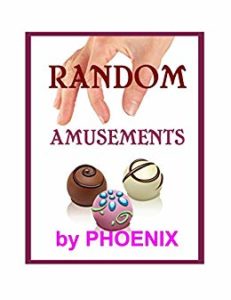 Random Amusements is a collection of short stories and flash fictions and good thing about the stories is that they were all summarized in such a way that few sentences seem to say a lot about the characters as well as the plot.

The first short story is titled A Drink of water and was about a former black slave named Truman who worked as a laborer on a railroad. His foreman was a racist who hated Truman’s guts yet still feared him because of his intimidating physique at 6ft four inches in height and heavily built. Truman didn’t like his current job but the ones he had before were worse off and being black during that period in America ensured he had very limited options.

The presumed death of a Chinese boy, his friend who worked in the site as a water supplier to the working men brought out the humane side of him as he insisted on going to get his body down the cliff against his foreman’s advice who felt he should return to work and forget about the dead boy but Truman called his bluff. He took the difficult plunge down the cliff and discovered that the boy was still alive.

The next was a flash fiction with the name Our Frozen World. It was a story about a group of people who discovered that the world has become frozen and most of the living things in it where dead and dying. Everywhere lay desolate and they were hungry and dispirited.

The third was a short story with its title as Snowbank. A story about Kyle and Dana who were a couple struggling to make ends meet. Dana was always on the edge as she usually gets angry over what she felt was Kyle’s lack of seriousness towards work, as he was always making excuses on why he had to skip work every now and then. She constantly reminded him that the bills had to be paid and Kyle’s latest excuse that the snow was fierce outside didn’t convince her at all.

There are other interesting stories in the series as well such as Duke’s Throw, a flash fiction.

My Beloved Ghost in the Amazon, a short story.

The Predator, a flash fiction.

Each of the short stories and flash fiction are all unique and no doubt quite interesting. However, their short nature means they would appeal more to children and the young at heart.

BIO: Hello. We are the co-writing team, FICTION BY PHOENIX, Lee & Gary Jordan, co-authors of Magical Realism, which takes place in a world that resembles our own, except for the introduction of magical elements, which cannot be explained by the conventions of our reality.
With love for the supernatural, we ask, “What if…?” What if the myth of the Loch Ness Monster is true? What if there was a secret society of paranormal people? What if we could figure out how to travel in time?
Our stories take place in the real world but bend reality.
Why? Because reality is boring.
That opens up whole worlds to write about and could include a mix of romance, fantasy, science fiction, alternate history, action adventure, weird tales, time travel, and most anything. However, they can tell you this: none of them is a usual story and will take you to a place you have never been to before.
We live in Hollywood, but we don’t spend much time in the wonderful California sunshine. Instead, we are maniacs who sit in front of our computer screens, weaving tales we hope you will enjoy

No similar books were found.