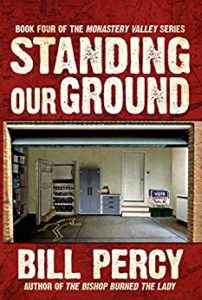 Flipping the pages of this book as one digests its contents is akin to watching an action movie. The plot began as Deputy Andi hurried to a crime scene in response to a 911 call about a shooting incident. Deputy Xavier had followed immediately as a backup. It turned out to be a weird homicide as Mr. Essex had shot dead a teenage intruder who apparently came to steal beer in a garage fridge, or so it seemed.

Andi got more than she bargained for as Mr. Essex was not only a psycho but also a liar who wouldn’t cooperate with preliminary investigation except he was forced to.

The dead teenager was Bernardo Cirilo and the Cirilo family flatly rejected Essex’s account of what happened. However, it was left for the judge to pass a verdict but it will be a long wait for justice to take place.

Other characters in the book include Ed—Andi’s husband who considered her car as a cop to be risky. Angela Norton—Essex’s lawyer, Irv Jackson—the prosecuting lawyer, Brenda—Essex’s ex girlfriend, Grace, Marla, the Cirilo family among others.

Standing Our Ground has a rich plot that centers mainly on crime, police investigations, and court sessions and is complemented by well developed characters.

BIO: Bill Percy, an award-winning novelist, draws on his experiences as a psychotherapist to write vivid, engaging tales of people confronting painful and challenging mysteries. His previous novels in the Monastery Valley series, Climbing the Coliseum, Nobody’s Safe Here, and The Bishop Burned the Lady, were finalists or distinguished favorites in multiple book award competitions. Bill lives with his wife, Michele, in Hope, Idaho, above the shore of idyllic Lake Pend Oreille in the shadow of the rugged Cabinet Mountains.