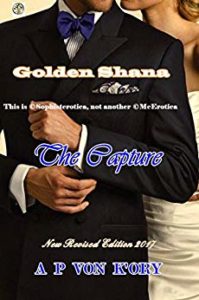 The story began with the Roman driving Westerland (a tourist hub) with a lady whose exceptional beauty was matched with her business acumen and class. You would be forgiven if you conclude that Roman is one of the famous James Bond Character we used to know in the past considering his love for classy women. As Shana sat close to him, he couldn’t help but be enchanted by her as his thoughts went wild with imaginations.

Roman’s thought process is typical of most men and would be easily relatable.

As one continues reading, A P Von K’ory’s way of mentioning town, cities and countries as part of the plot becomes discernible.

Another area Golden Shana; The Chase scored a bull’s eye is the way details were provided. The author rarely leaves anything for assumption as every action, thought and surrounding details are always brought to the reader’s attention. One good thing about providing detailed description of the plot and characters is the fact that it makes the reader to have a good grip on the story since it would help them to create vivid imaginations of what is going on the book they are reading.

The Cons: One aspect of the book I felt wasn’t top notch is in the presentation of the characters, I mean granted that the main character of the book, Roman was actually well developed; the others weren’t especially Shana his mistress. In my opinion, considering the size of the book which is fairly large, I believe the author should have given more attention to other characters aside Roman. Also, the story was largely presented through the eyes of Roman, however I feel that the other characters should have their own worldviews highlighted too.

Again, the small size nature of the pages makes reading the story a bit stressful as one would need to scroll down continuously.

On a general perspective, the story is fun and exciting to read, and for a sequel, did a good job in making sure that The Chase still managed to be unique with lots of additional information and less raunchy sex compared the previous edition.