Home > The Fountain of Youth 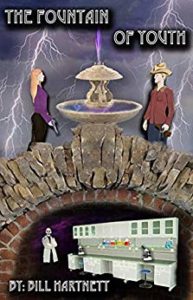 The book started on a tense note when a 13-year old boy, Dieter was kidnapped by a man and his lady partner. He was taking away from his country Germany to an unknown destination. When the man left their hotel room to get some food, the lady tried to seduce Dieter and have sex with him, but Dieter played a smart one on her by hitting her repeatedly with a nearby lamp until she went limp. However, on grabbing the telephone and managing to remember his father’s phone number, the call went through but not long after his father picked at the other end, the kidnapper returned. Then Dieter began to cry as he told his father how much he loved him.

Unknown to the kidnappers, Dieter happened to be the son of a wealthy German but regardless, it was obvious that the motive for the kidnap wasn’t for ransom since they made no request for money, but something more sinister which the detectives would have to unravel.

Siobhan was in Germany when the kidnap attempt was foiled and was recalled to Colorado to help in the investigation. Tall, beautiful and smart with a cocky mien; Siobhan saw the investigation as a way up the ladder. What’s more, it means teaming up with Caleb who once took a bullet for her.

Gerherdt has worked for Wolfe for almost three years now, always swift and result oriented until the latest kidnap attempt went awry. He couldn’t understand how the little could have killed Sasha when he was tied up. It wasn’t his fault in any way and has always served Wolfe effectively, but he knew Wolfe was ruthless and would get him killed the instant he knew he could blow his lead, and being a fugitive means exactly that. So he had to watch his back for both the Wolfe and the police.

Other characters in include, Caleb, Tom and Rose who were all working on the case. Giacomo was Wolfe’s dependable hit man with a reputation that goes before him. His latest task was to eliminate both Gerherdt and Caleb. Ravenna and her partner Eusebio also worked for Wolfe.

The book has a rich plot that is rooted in the attempt by the police to stamp out the evil that Wolf and his gang were committing.