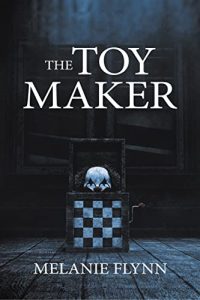 Private investigator Rylee Scott was good at what she does. She was born with special psychic abilities that gave her an edge over others. Exposing the secret affairs of cheating partners was a boring activity but she couldn’t help it since her rich clients kept paying good money. However, when a teenager desperately needed her help to find his missing sister, she accepted to do it pro bono. Although reading minds and observing echoes among other supernatural stuffs was a gift she previously considered as curse, it will eventually come handy if she must find the missing college girl.

Detective Cal was passionate in his job of going after the bad guys but when a manic serial killer was on the loose, he realized he was up against something more dangerous & he needed to act fast. Maybe, working with a psychic private investigator could help turn the tide in his favor.

The Toy Maker is a thrilling crime story that would keep readers on the edge—feels more or less like a Hollywood blockbuster!

BIO: Melanie Flynn was born and raised in Gander, Newfoundland and Labrador, Canada. She is a graduate of Memorial University of Newfoundland and Labrador where she got her Bachelor of Arts majoring in English and minoring in Psychology. She went on to graduate from the University of New Brunswick Law School with a Juris Doctor degree. Currently she is a practicing lawyer and small business owner. She co-hosts a variety podcast called Inconsistently Consistent. She is an animal lover and has two cats and a German Shepherd.