Home > Through The Raging Storm 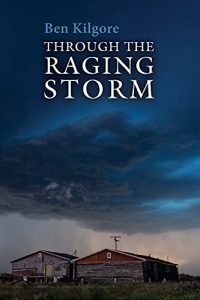 The small tourist town of Vanderpool had always been peaceful and serene until the night an alarming storm hit it. Two witnesses claimed they saw strange balls of lights over the hills while the storm raged. Could it have been a plane crash, meteors or even aliens arriving? Joe Garner took it upon himself to unravel the mystery behind it. As he gathered exhibits and conducted investigations with the help of two others, he never thought it could eventually result in an unprecedented and shocking outcome that will get NASA involved.

Other characters in the book include Martha, Pete, Matt, Scotty, Roger, Grace, Doc and Randy etc.

In the midst of all that was happening around him, Joe couldn’t help falling in love with the woman that mattered most to him.

Through The Raging Storm is a thrilling story full of suspense, adventure and love.

BIO: Ben Kilgore holds a graduate degree in physics. He intended to be a research scientist, but other interests took his career in a different direction. Nevertheless, science has always been a passion.
Something in the news started “what if” thoughts that resulted in the thesis for this novel. We tend to think of science as something that happens in the research lab. But throughout history, observations by non-scientists have been the first clues leading to scientific discoveries.

The author’s other strong interest is history– particularly ordinary people coping with new and unexpected circumstances. That’s what drives this story forward. When the story starts, the characters have no idea what lies ahead.