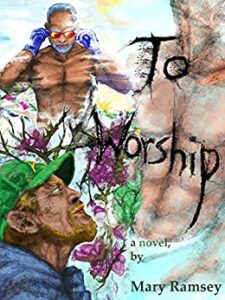 What basically makes nonfiction books unique is the fact that they are real life stories that happened to people and not some conjured up fantasies. To Worship is not just a captivating nonfiction story, but one that will get most people emotional and tearing up. Josh was a believer in the Christian faith and biblical doctrine but when their only daughter fell in love with Chloe, her childhood best friend, and insisted on marrying her, it set father and daughter on a collision course. Josh eventually disowned Chloe against his wife’s wish. It took an accident, subsequent diagnosis of terminal cancer and an angel in the person of a nurse—and ultimately, the unraveling of a dark secret to drastically turn things around.

Other characters in the book include Carolina Miner, Tomas Adele, Pup (a service dog), and Grace among others.

The only snag about this book is the occurrence of few typographical errors that ought to have been detected during proofreading.

At just 149 pages long, To Worship is a relatively short book but one that will certainly keep readers on the edge. It also has steamy sex scenes that form part of the plot. It is a book you may not want to drop until the very last page!

BIO: Mary Ramsey is a blogger, artist, and writer. She served in the United States Air Force and has a BA degree in Cinema. Although she was born in California, her work in the military took her all over the world including the diverse Midwest, from the beautiful landscapes of the Dakotas to the small towns of Wisconsin.
She has always had a fondness for unique superheroes–underrepresented minorities, LGBTQ, abuse victims, and so on. She loves an inspiring story that will make her cry. Her favorite movie will always be 13th Warrior.