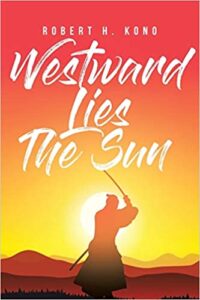 Greg Sonoda was a third generation Japanese American attorney who found himself in a country that has a bias against his origin. Having survived in the concentration camps where they were dumped during the WW11, it would be another battle trying to overcome prejudices and discriminations targeted at people of his race. However, when Henry Miyamoto requested for his legal services in pursuing a case against Dick Simpson in a slander suit, he saw himself in an uncomfortable position but it also presented an opportunity to make positive impressions.

Major characters in the book include Caroline Lister, Gary, Professor Higa, Bill Terada and Hank Mochizuki among others.

Westward Lies The Sun is an interesting book that captured the cultural differences between America and Japan. The plot spans several decades between the era of WW11 and contemporary times, and covers areas such as politics, economy, religion and sociocultural issues.

BIO: Born in 1932, R. H. Kohno (a pen name) has been interested in writing ever since he had a couple of poems published by his teacher when he was five years old. He was thrown into the concentration camps with his mother during WWII while his father was arrested by the FBI since he had access to a fishing boat and was suspected of contacting nonexistent enemy submarines. He was put into separate detention centers. After the war, Kohno repatriated to war-torn postwar Japan to spend thirteen years there in isolated exile as an outsider and American lookalike. Returning to the United States after a stint working for CIA in Tokyo, he settled down to get married and complete his college education, eventually earning a B.A. in English and being elected to Phi Beta Kappa. He kept alive his interest in writing and in 2001 produced his first novel, The Last Fox, A Novel of the 100th/442nd RCT. It has been followed by other works, the latest of which is Starburst Over China.