Home > A DREAM OF DEMOCRACY 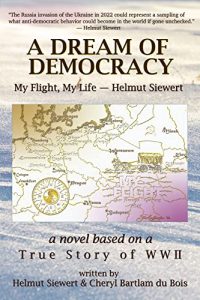 As Russia’s Red Army advanced on them with alarming speed, Lydia and her two remaining children were forced to flee in a hurry, alongside other horrified Germans. The night was dark and bitingly cold, and with no planned evacuation by Hitler, they were condemned to either survive the perilous journey to Berlin or be devoured by a horde of angry enemy on vendetta mission. Helmut has never experienced such large-scale suffering and anguish in his life. Would they ever survive the nightmare? Would there even be an end to it all?

A Dream of Democracy is a true life story about the horrors of the WW11 as told through the perspective of Helmut. It’s a heartbreaking story filled with suspense, emotion, bloodshed and other harrowing experiences. There are pictures as well that would make the reader to understand that despite how scary it is, people actually experienced them—a gripping true life story like no other!