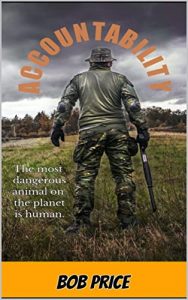 Leo Priest’s parents were still alive but he didn’t feel any better than an orphan fending for himself. A perpetually drunk father and a carefree mother who walked away where more or less dead to him, so joining the British army at age sixteen was the best moment of his life as he embraced the military as his new family. However, in a twist of fate, Leo was accused wrongly and betrayed by those he trusted most.

After 15 years of being locked up in a deadly prison for a crime he didn’t commit, Leo was broken. All his heroic efforts in the line of duty were swept under the carpet like they never happened. However, now he has his freedom back, it was going to be payback time!

Accountability is a short but interesting book about military action, betrayal and prison life. It is a book most readers would find enjoyable to read.