Home > Blood Of My Shadow 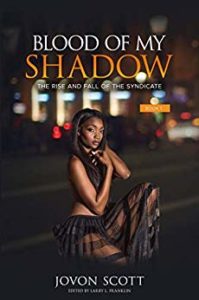 Blood of My Shadow is a book that covered all the shenanigans that takes place in the underworld where drugs are freely ferreted across borders by cartels. Granted that lots of books have been written in the past that gave insight about the drug world, however the author, Jovon Scot told the story in a unique and indebt way. The reason is not farfetched considering that he was an active player in most of the activities and was able to have firsthand information as well as observed everything from close quarters.

Another good attribute of Blood of My Shadow that helped in making it more “real” and pulsating is the way Jovon Scot begins the chapters with time, date and venue in dateline sort of. Once again, in helping to project the worldview of the characters in the book, the author would bring everyday life theories in explaining the motive or why the characters chose to act the way they did.

In terms of overall character development, the actors in Blood of My Shadow does not really ‘jump in your face’ so to speak. That is one area the author should have done better. The characters ought to have been more dramatic with salient unique attributes that would easily set them apart. This is not to say that they are all bland, not even in the least. However, the point is that they should have been more developed.

Another important aspect of written works whether fiction or nonfiction is the plot. It is the storyline that will determine whether a story will be thrilling or otherwise and that’s another major area Jovon Scot was able to score a bull’s eye. The book has a rich plot that seamlessly flowed from the beginning to the very end.

Another factor that helps in transforming literary works into becoming evergreen classics is the ability to make readers to identify with it, and Blood of My Shadow did well in that area. Readers that know how the underworld of drug racketeering works will easily agree with the events that took place in the book as factual while others who had no prior knowledge will be able to gain an insight beyond what is peddled in the mainstream media.

On a general perspective, Blood of My Shadow is amazing and such well detailed book can only be written by someone who was once actively involved as an insider.

BIO: Jovon Scott, an inmate in an Illinois Prison, wrote “Blood of my Shadow:  The Rise & Fall of the Syndicate.”  My name is Larry L. Franklin, the editor of Jovon Scott’s work.  I was impressed with Jovon’s imagination, and agreed to edit his work and find him a publisher.  Because of Jovon’s incarceration, I’m in the position of helping him market his book.  It is our hope that you will consider reviewing “Blood of my Shadow.”