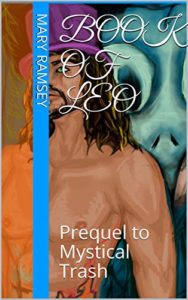 After going through the first page and a bit of the second, I immediately realized this was going to be one hell of a funny book. I couldn’t help making several chuckles each time the author, through the worldview of the protagonist, expressed funny thoughts. However, as the book progressed, it became a little more complicated and even outright horrific. Events in the book took a surreal turn when Leo used a terser on Clarissa, a prostitute that walked up to him and made away with her unconscious body. It turned out that Clarissa was actually an evil woman and serial murderer; her intention was to seduce Leo, make him to lose guard and then murder him just like she did to others before him but unfortunately for her, Leo was equally an exorcist with mystical powers.

The Book of Leo is actually a horror story and featured other demon hunters such as Alicia, Momo (a woman with the body of a bird) as well as others like Tony, Austin, Jamie etc

The book is no doubt interesting but with lots flashbacks, and events happening in some of the characters’ trance state which made the book a bit confusing in some sections and prompted me to read a few lines/sentences twice before I could understand it. However, the author did a great job in providing minute details, especially in most of the horror scenes and it helped a lot in creating vivid scary images in the mind of the reader, and since Book of Leo is a horror story then the objective was achieved in that area.

Aside the gore and trails of blood and other horrific actions such as disemboweling of victims, eating of human intestines and other unspeakable things that took place in course of the story, Book of Leo equally has normal everyday activities in-between the horror scenes in its plot, which I felt was another good way of making the story to appear real.

Warning! Do not read this book when you are alone at night, if you are lily-livered!

BIO: Mary Ramsey is a blogger, artist, and writer. She served in the United States Air Force and has a BA degree in Cinema. Although she was born in California, her work in the military took her all
over the world including the diverse Midwest, from the beautiful landscapes of the Dakotas to
the small towns of Wisconsin.
She has always had a fondness for unique superheroes–underrepresented minorities, LGBTQ,
abuse victims, and so on. She loves an inspiring story that will make her cry. Her favorite movie
will always be 13th Warrior.

Mary lives in San Francisco, California with her husband.