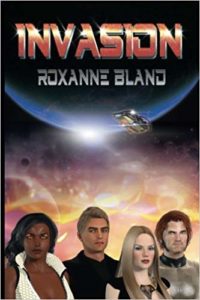 Invasion is a science fiction book. The curtain rose on Kurt; a vampire regent who was terrified that his powers were eluding him while his need for blood to quench his thirst kept increasing. To compound his woes, his ability to read mind and be telepathic were already lost yet he couldn’t explain why all these were happening to him. In all these, he has to watch his back against the many undead that will pounce on him and forcefully remove him from his exalted position on the throne of Seattle, once they discover he was no longer as powerful as he used to be. Kurt’s nightclub offered him the opportunity to unwind and equally enjoy his usual fix of blood mixed with wine.

Another character, Parker Berenson who is Kurt’s servant is an alpha male from Seattle’s werewolf pack, likes making merry and having fun while awaiting his girlfriend, Melera’s return from her home galaxy. Ironically, while Parker was missing Melera, Mandy the beautiful blond was in love with him and at the same time angry that Parker was not reciprocating her love for him. There are other characters too that played outstanding roles such as Garret, Feodor, Li An, Daniel etc

As one continues to read Invasion, one thing becomes clear; how distinct and well-developed characters in the book are.

Invasion equally has a good plot that flowed progressively. It dwelt in the thrills associated with urban lifestyle while the theme kept changing along with the characters as they move from one location to another. The mix of humans and exotics also contributed in making the story exciting.

Although, one may argue that the story dragged for too long but that was compensated with the availability of so many characters that are unique in their own way.

BIO: Award-winning author Roxanne Bland grew up in Washington, D.C., where she discovered strange and wonderful new worlds through her local public library and bookstores. These and other life experiences have convinced her that reality is highly overrated.