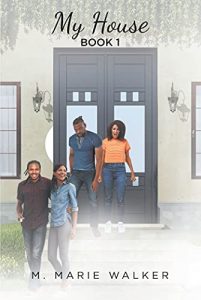 When Mike and his wife separated over what seemed to be irreconcilable differences, he eventually realized he was still in love with her. Fortunately for Mike, the feeling was mutual and chances for reconciliation with Jakyra became promising. However, bad blood had permeated during the period of separation, especially within Mike’s siblings who thought Jakyra was bad news and the moves toward reconciliation a crazy idea. As tempers rise and emotions flare up, Mike found himself at a crossroad—how could he get back his lovely wife without tearing apart his close nit family?

Other characters in the book are John, Jermaine, Johnee, Marlon, Koko, George, Mylesha, and Jason among others.

My House is an interesting story that revolves around love, family, and passion. It is the sort of book no reader will want to drop until they read the last page.

BIO: M. Marie Walker is a graduate in Creative Writing. She is 45 years old, married for 14 years and resides in Farmington Hills, MI. M. Marie started storytelling at age 15 and by 17, she started My House (having no idea , at the time, that it would turn into a series). When she’s not writing, she likes to read dark romance, suspense, and sometimes erotica. M. Marie also likes to walk in nature, cook and is a huge Marvel fanatic. She believes family is one of the most important things in life. Most of all, M. Marie wants to share her gift with the world, and she does that through creating a world of her own in writing; it’s her happy place.