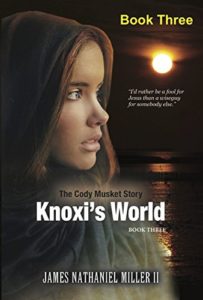 Knoxi’s World is the third book in a series following ‘No Pit So Deep’ one and two. The story began on a suspenseful but exciting note, and before long; it felt like one is watching a thrilling movie through the pages of a book.

The plot revolves around Knoxi Musket; a University of Texas female student basketball player. Knoxi was not just a gifted sports person but was strong-willed in doing what she thinks is right even if it comes at a great danger to her life—a path that will put her on a collision course against a dangerous child trafficking syndicate.

Another aspect of the book that is quite enjoyable is the entertaining and educative way the conversations between characters are structured, especially when they oppose each other.

Although some conversations were interspersed with Spanish depending on the character, but they were all interpreted in English as well, which added to the fun.

Lastly, despite the fact that this book is a continuation, it can also be read as a stand-alone without reference to the earlier books in the series—simply because it has no loose ends.