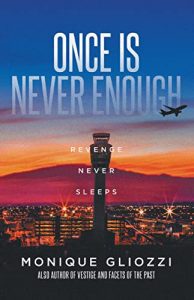 Larissa’s grandparents were ambitious of turning their family business, a wine producing company in Napa Valley into a global brand. Unfortunately, her uncle had ulterior motives which resulted in the murder of her father. As if that wasn’t bad enough, she had watched while the same man strangled her mother to death. The tragic episode effectively turned her amazing childhood into a nightmare.

Would time heal Larissa’s wounds? Would she forgive or go all out on a revenge mission? Only time would tell.

Once Is Never Enough is an interesting novel that resonates with the saying that life is not a bed of roses as tragedy, disappointments and illusions could be experienced when we least expect it.

BIO: Born in Dublin, Dr Monique Gliozzi, a graduate from the University of Western Australia medical school, has a keen interest in forensic sciences and psychiatry. She works as a psychiatrist in Perth, with ties to the UWA School of Psychiatry, where she has held a role as a Senior Clinical lecturer. In 2016, her love for teaching has granted her a nomination for an Excellence in Teaching Award.
Monique also holds an interest in aviation, training at the Royal Aero Club of Western Australia, where she obtained a commercial pilot licence. Following this, Monique completed her instructor rating enjoying work as a senior flight instructor.
Monique has rekindled her passion for writing starting with the fictional thriller Foresight, followed by Hunted, ghostly encounters in Vestige, Diversity – a compilation of entertaining short stories of different genres and Facets of The Past. Once Is Never Enough is yet another fast-paced action packed thriller.