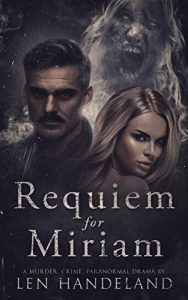 Miriam and Sidney were lucky to have escaped from Nazi Germany and had arrived United States safely. Though Miriam cramped alongside other members of her family in a small house in Brooklyn, but Sidney was a little more fortunate as his parents could afford to live in the more exclusive Manhattan. It had been a love at first sight and Miriam thought he was her knight in shining amour. They got married but as the years rolled by, it became a turbulent relationship.

Sidney realized he was no longer in love with his wife; his heart now belongs to another woman. However, getting a divorce would hurt his finances and assets drastically. So, he resorted to other means to violently take Miriam, his wife of over 30 years, out of the picture. However, he never envisaged the horrors that would follow.

The story was set in the late 1980’s and also offered a sneak peek into how things used to be in the past. It is a scary story of murder, suspense and horror—it is certainly not for the faint-hearted!

BIO: Len Handeland’s creativity took him from attending FIT (Fashion Institute of Technology) in Manhattan to hair. He studied fashion illustration, then years later to a long and successful 27-year career in the hair industry as a sought-after hair stylist, hair colorist, and salon owner. Len owned a salon in San Francisco’s Union Square for nine years and two salons in the town of Sonoma, Wine Country; for eight years; now fully retired from hair, Len became a full-time writer in the spring of 2021.