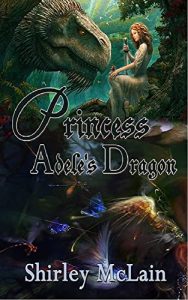 Princess Adele was a gracious lady who appreciated humanity. However, some people mistook her kindness for weakness. Instead of reciprocating her love, Miranda schemed how she could get Adele out of the way by all means and marry her secret lover, Lord Ashmore. Unbeknownst to them, Princess Adele was not just courageous and daring but equally received intensive private training that prepared her on ways she could tackle any eventuality that may arise.

Other notable characters in the book include Robert, Anthony, Bruce, Draiocht, and Edward among others.

Meanwhile, Mickael rallied some fighters on his side as he began a mutiny to overthrow the King of Valdoria. The sustained attack on the castle forced Princess Adele to join forces with her husband and her brother, the king, as they battled to save the throne—even if it means unleashing the dragon.

Princess Adele is an interesting paranormal story with a plot that was set in medieval times.

BIO: I am a retired RN enjoying my retirement to the fullest. I like adventure, making friends, and travel. I have seven dogs and two cats. They are like having a house full of three-year-olds. Now for the rest of the story. I spend most of my time sitting in front of my computer, working on my latest book or talking about Essential Oils. On the personal side, I’m married to a wonderful man who spoils me, and I love it. I am very much a country girl. I love living on our five acres on Little Pole Cat Creek, watching the deer and other animals occasionally stick their heads out of the trees. It’s a fun life.